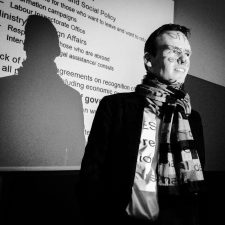 Dr. Peter Scholten is Associate Professor in Public Policy & Politics, at Erasmus University Rotterdam. His research focuses on themes of intercultural governance, comparative public policy, and the relationship between knowledge and power. Dr. Scholten is director of IMISCOE, Europe’s largest academic research network on migration, integration and social cohesion. Furthermore, he is editor-in-chief of the journal Comparative Migration Studies (CMS) and member of the editorial board of the Journal of Comparative Policy Analysis. Also, he is fellow of the Scientific Council for Government Policy and coordinator of the master Governance of Migration and Diversity (a cooperation of Leiden University, Delft University, and Erasmus University Rotterdam). Dr. Scholten has led various international research projects that are relevant to this project, including IMAGINATION (Urban Implications and Local Governance of CEE Migration (JPI-Urban Europe), DIAMINT, Science-Society Dialogues on Migrant Integration in Europe (VolkswagenStiftung), and UPSTREAM (Developing Effective Strategies for the Mainstreaming of Integration Governance (European Integration Fund). Some of his recent publications include Scholten, Peter et al. (eds.). Integrating Immigrants in Europe: Research-Policy Dialogues, Springer, 2015; Breugel, Ilona van, and Peter W.A. Scholten. « Mainstreaming in response to superdiversity? The governance of migration-related diversity in France, the UK and the Netherlands ». Politics and Society, 2016.

Beyond speaking truth to power; the reality of research-policy dialogues on migration and integration in Europe

Migration and migrant integration have more than ever become fiercely politicised topics almost all over Europe. How has this affected the interaction between migration research and policymaking? This relationship was once known to be almost symbiotic, leading to what some have described as knowledge coproduction, national models of integration or even ‘methodological nationalism’. Examining evidence from a number of European countries, I will show that the relationship between research and policy has not become less intensive; research remains a prominent source of policymaking. However, the nature of research-policy dialogues has changed, with more instrumental knowledge coming to the foreground, a a more institutionalised relationship between data providers and policy institutions, and preference for ad-hoc expert committee to solve political contestation around incidents or crises. A better understanding of these challenges to research-policy dialogues will also help migration scholars to define their role in these relations and promote a more reflective attitude of migration scholars, without necessarily retreating into an Ivory Tower.